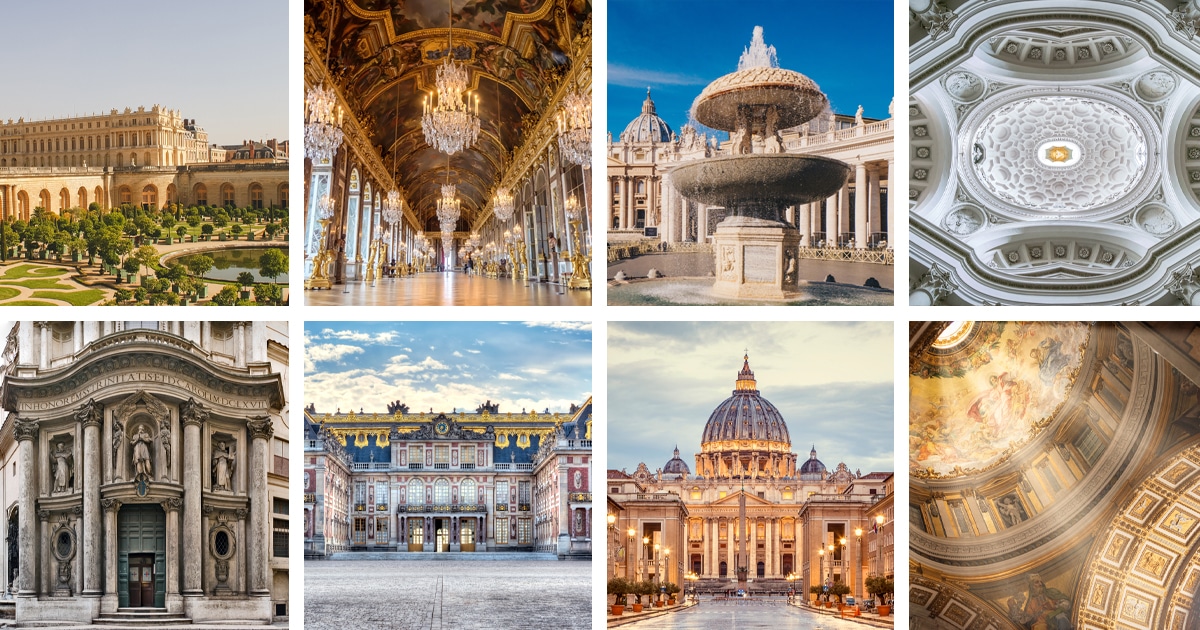 Even if you cannot name a single Baroque-style building, you might be able to imagine the quality of Baroque architecture: extravagance, drama, and flamboyance. The Baroque movement became widely popular in Europe in the early 17th century and remained in favor past the 18th century as it moved across countries—and even continents—as Europeans brought the design aesthetic to their colonies. Aside from the characteristics of Baroque architecture, the main directive was to inspire awe in all those who saw it.

The Baroque movement, like most movements, was not confined to architecture but can be found in literature, painting, sculpture, music, and other forms of art and culture. The word baroque has a long history and can be traced back from English to French to Portuguese and finally the Latin word for wart. The Portuguese word baroco, meaning misshapen or flawed pearl, is closest to the origin of the movement.

While this may seem like a lot of information about the word baroque, it is important to understand in reference to the movement. It means celebrating the unlikeliness of a work as well as designing surprise and awe into a piece. In music, this translates to improvisation and sudden shifts in a movement, and in art, it sometimes translates to trompe-l’œil—an art style that “deceives the eye” and manipulates perspective. In architecture, Baroque means complexity and ornamentation that creates a sense of wonder.

In this article, we will break down the common characteristics that define Baroque architecture and introduce you to five of our favorite buildings designed in the Baroque style. You may just find the next destination on your travel bucket list.

It is difficult to separate Baroque architecture from art and sculpture. Since ornamentation was such a critical component to this architectural style, these buildings also introduce us to other mediums that follow the same ideals. 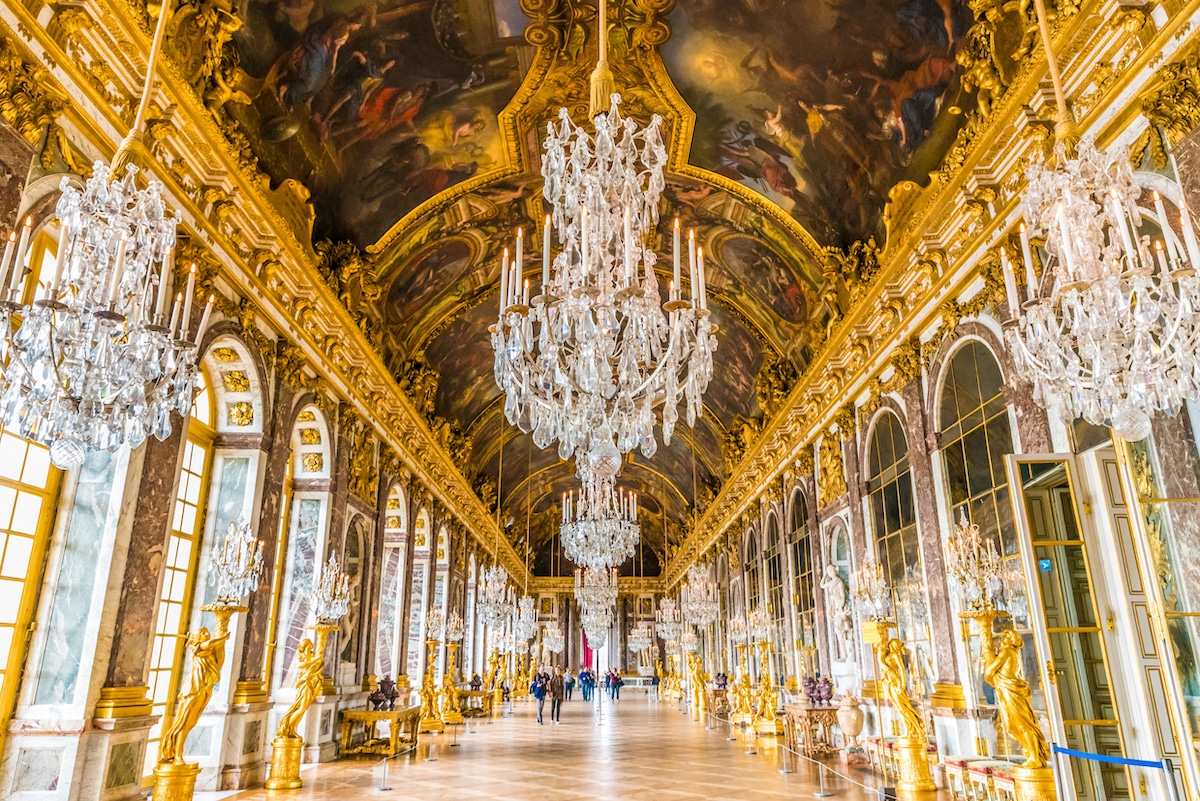 Grandeur, or drama, is probably the most obvious characteristic of Baroque architecture. This theme is also the reason for other characteristics like ornamentation or curves. In churches, the grandeur of the architecture was used to inspire awe that made visitors feel connected to God or to feel small in comparison to the size of God—and the church. Grandeur, in this sense, often means size—both in height and in the sheer size of the building—but grandeur can also be applied to the amount of ornamentation and decoration. 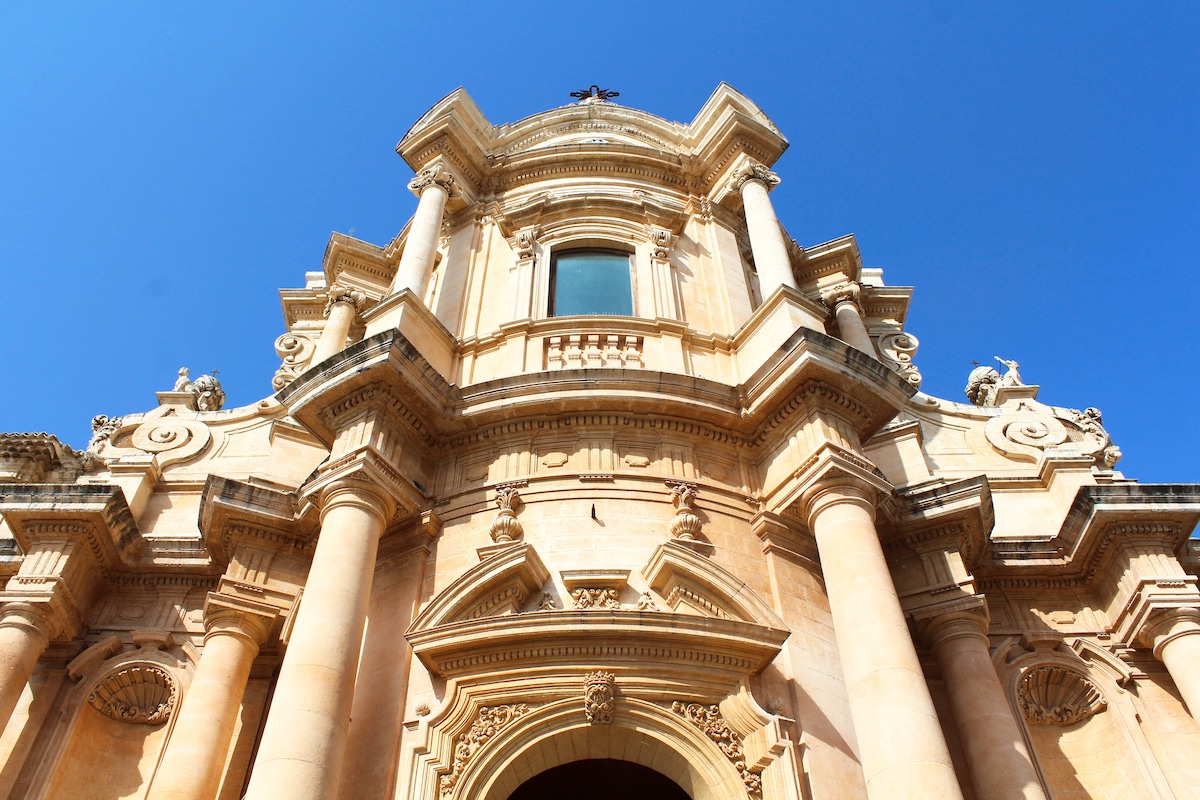 It makes sense that Baroque architecture would feature unexpected curves and organic shapes considering the term is roughly translated to “irregularly shaped.” These movements regularly occur in grand façades and are often concave entrances or places of statues. However, these organic design moves can be found anywhere in Baroque architecture, especially in the domed rooves of cathedrals or churches. 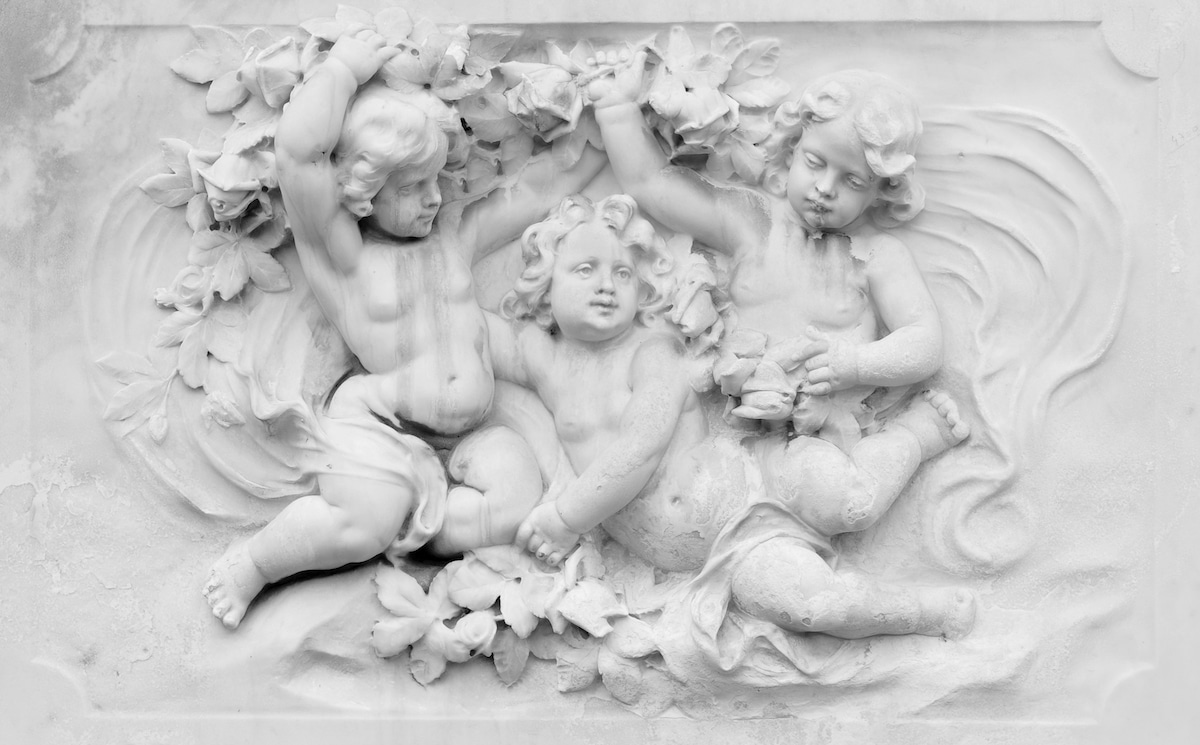 Ornamentation in architecture refers to non-structural decoration often used to add visual complexity. Baroque interiors are certainly complex. Almost every surface is decorated with pieces of art, sculpture, or ornamentation on structural pieces of the building. One example of this interior ornamentation is a cartouche. These were decorative sculptural elements that add to the complexity of interior spaces. Other common depictions used include weapons, trophies, fruit, and cherubs. 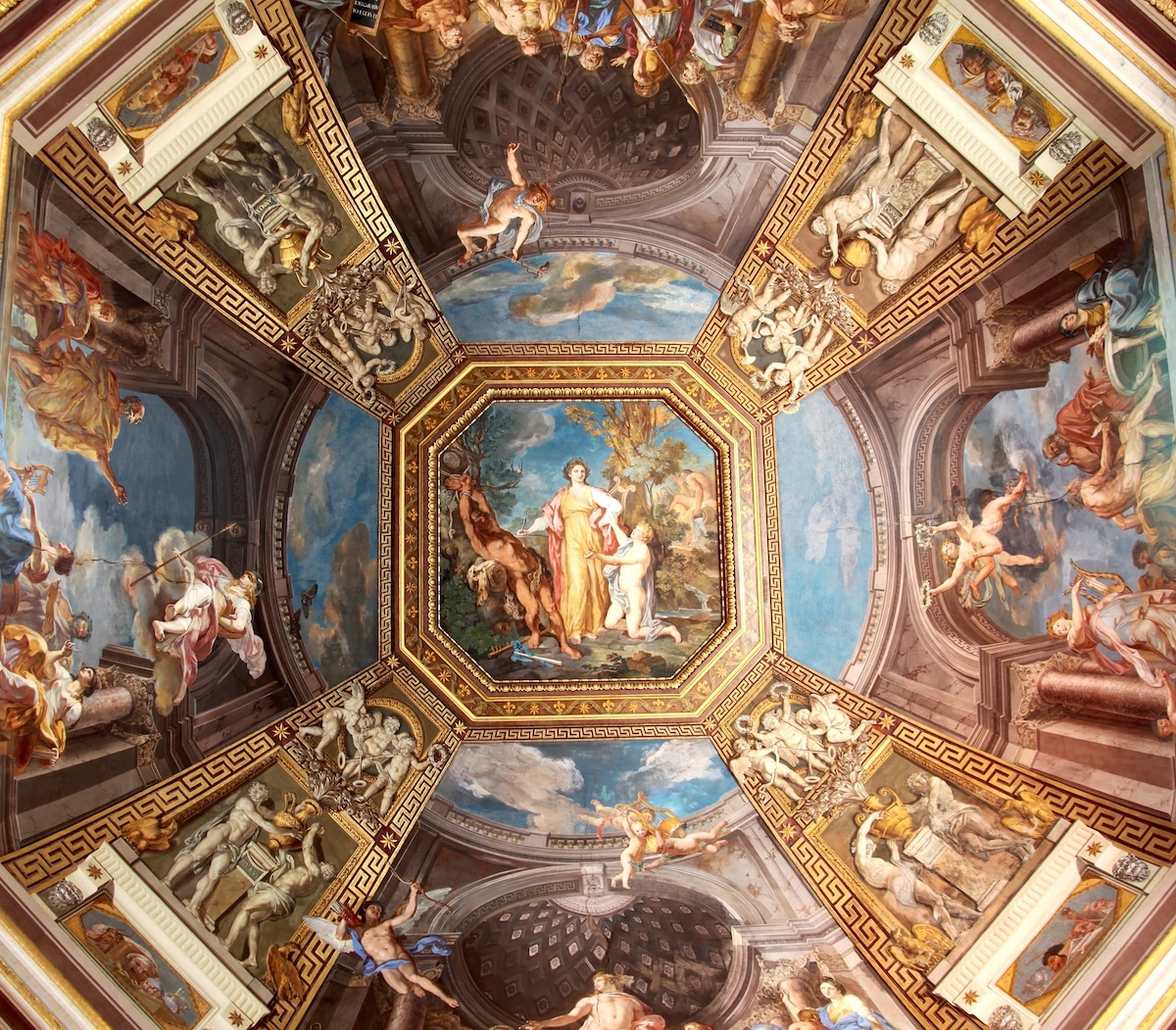 Painted ceilings, in churches at least, were often used to make visitors feel they were gazing past the church into the heavens. The ceilings were also painted in Baroque-style art. They were frequently trompe-l’œil pieces that fooled the eye into making solid pieces feel that they had more depth. Painted ceilings are also associated with the High and Late Baroque periods as the limits to art and architecture were pushed further (and further). 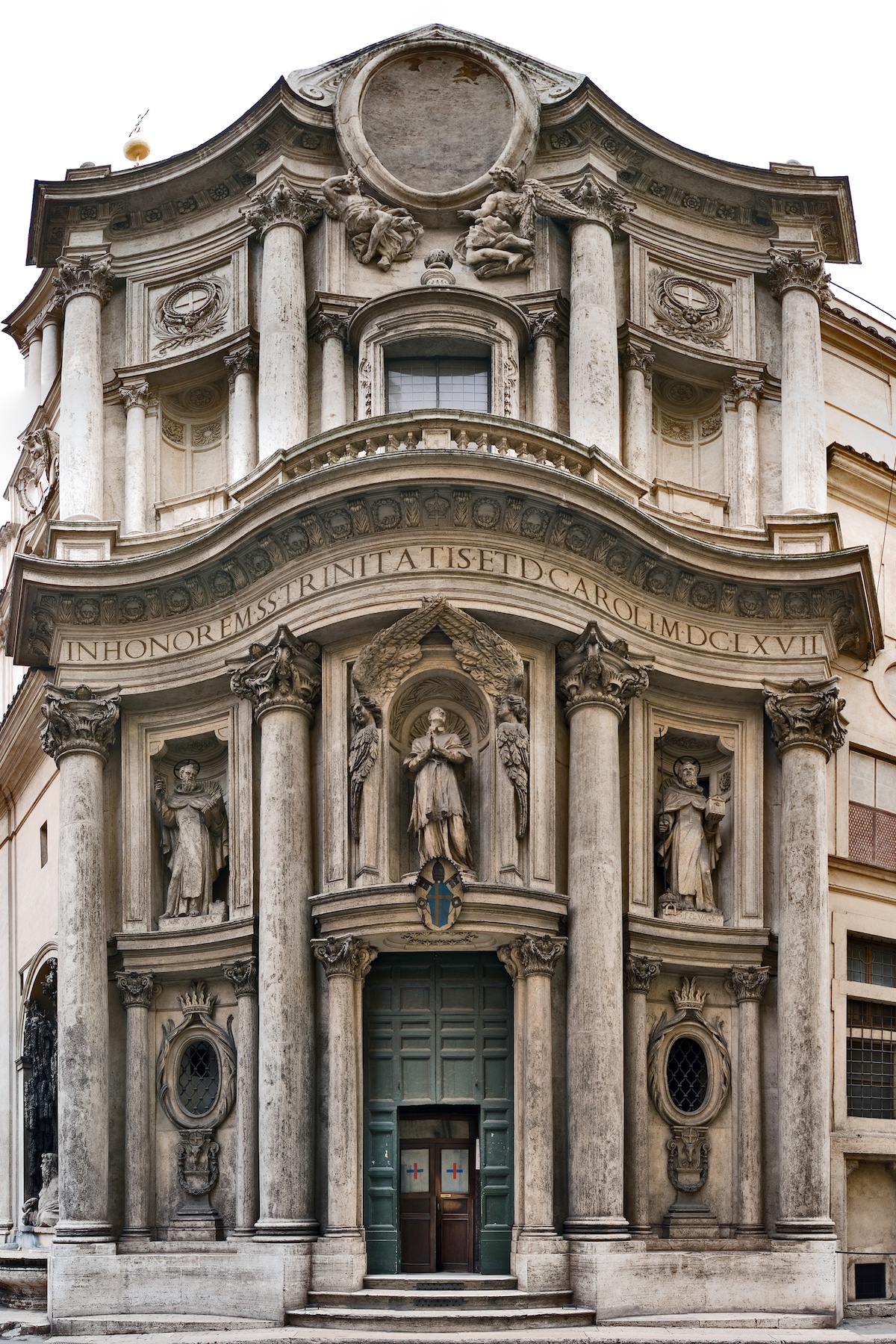 San Carlo alle Quattro Fontane, translated to Saint Charles at the Four Fountains, is a perfect example of Baroque architecture. In the front façade, you can clearly find the unusual curvature of the “misshapen pearl” for which the style gets it name. It was designed by architect Francesco Borromini, one of the founding fathers of Roman Baroque architecture, and is probably his best-known work.

San Carlo was designed as an addition to a monastery on a small site. To accommodate the added program, Borromini designed an unusual floor plan of a Greek cross with convex curves instead of straight edges. These curves can also be found in the unusual façade with both convex and concave curves to create an undulating wave.

Though we now understand these characteristics to be indicative of Baroque architecture, Borromini’s design was revolutionary and inspired other contemporary architects to use some of the same ideas. He mainly used the curves to meet the difficult site requirements, but the beauty of the curves helped to define Baroque architecture. 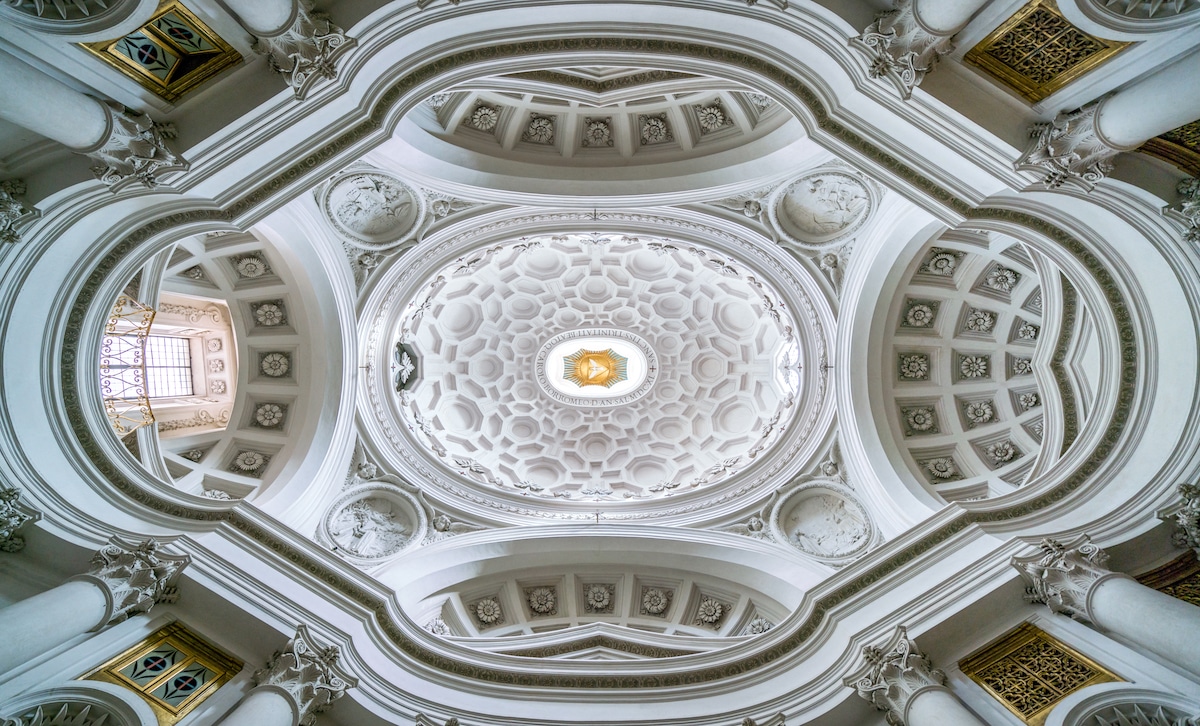 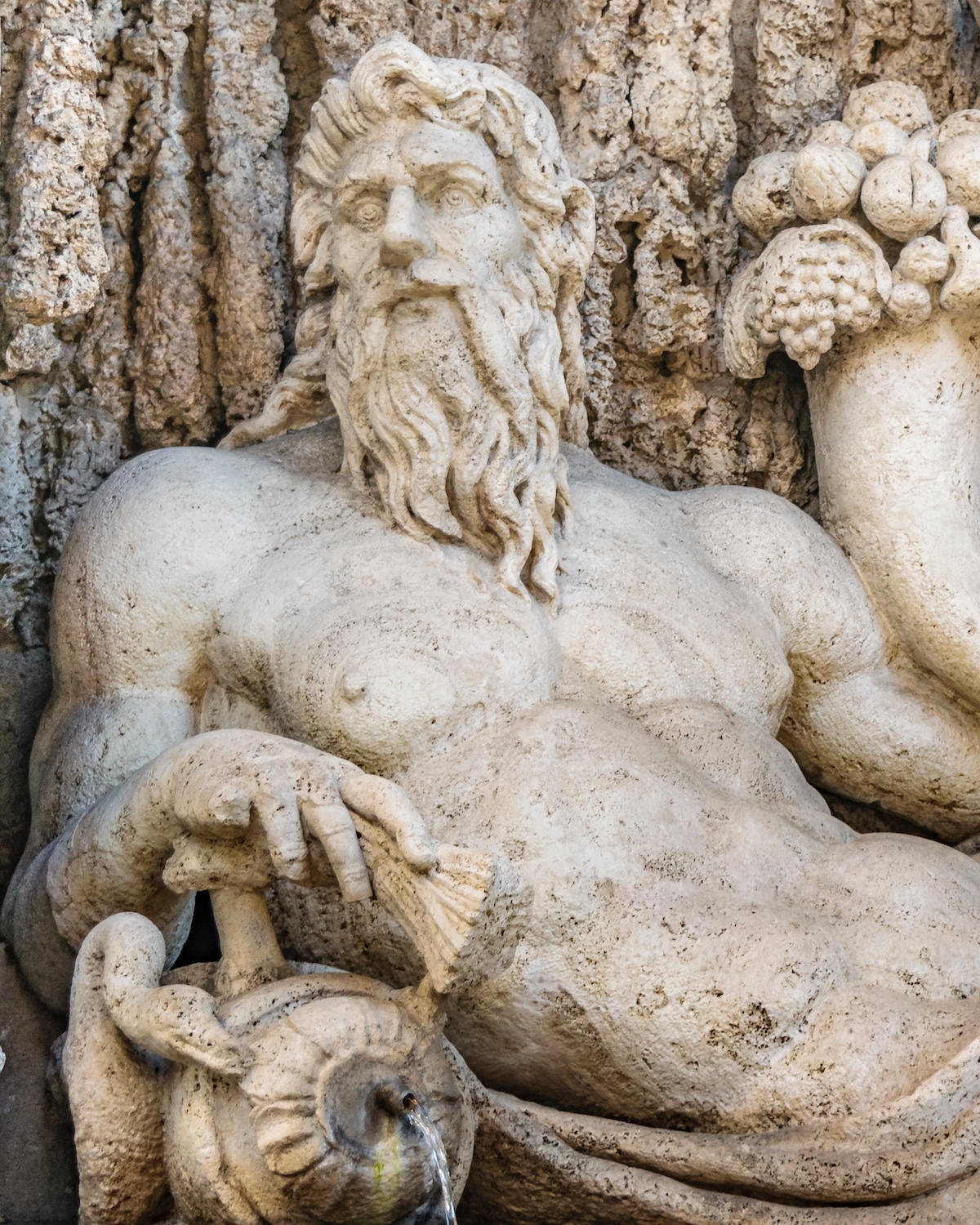 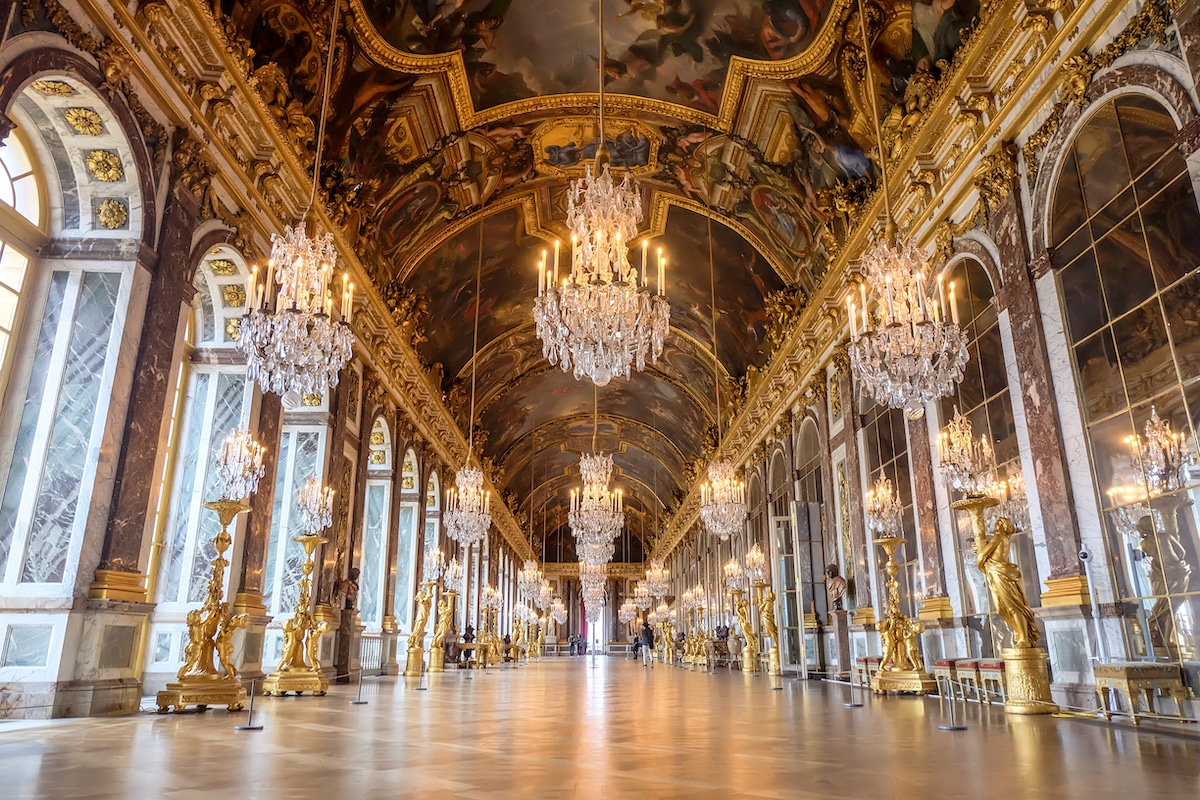 The Palace of Versailles—and more specifically, its famous Hall of Mirrors—might be the most obvious example of Baroque architecture. While Borromini’s San Carlo alle Quattro Fontane helped to define the style, the Palace of Versailles embodies the height of art and design in the Late Baroque period.

This château started off as a small hunting lodge commissioned by King Louis XIII and was later expanded by his son King Louis XIV. The palace acted as the official home of French royalty from 1682-1789 during the reigns of King Louis XIV through King Louis XVI until the French Revolution began. The revolution meant that much of the riches in the palace were used to finance the fight and King Louis XVI left Versailles for Paris, marking the last time the site would be used as a royal residence. The palace was still a world wonder and the place of many historic events like the Proclamation of the German Empire and the Treaty of Versailles which ended World War I.

Although the palace was inspired by the Baroque style found in Rome and across Italy, it was also designed in an especially French style. The palace now contains approximately 2,300 rooms in addition to the French gardens and park.

The Hall of Mirrors was designed by architect Louis Le Vau, who was the architect for the entire palace, interior designer Charles Le Brun, and landscape designer Andrew Le Notre. It embodies all of the qualities of the French Baroque style including: curved designs, high domes, painted ceilings, and visual complexity through ornamentation. 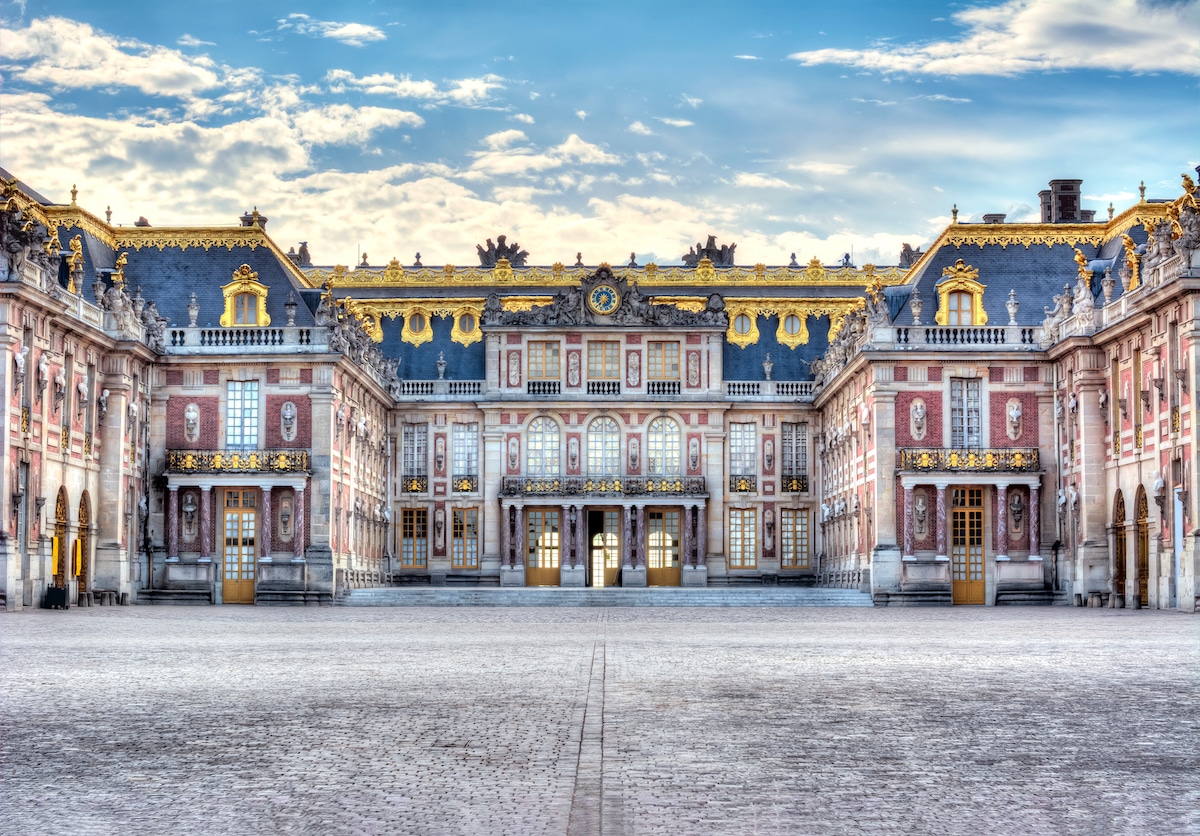 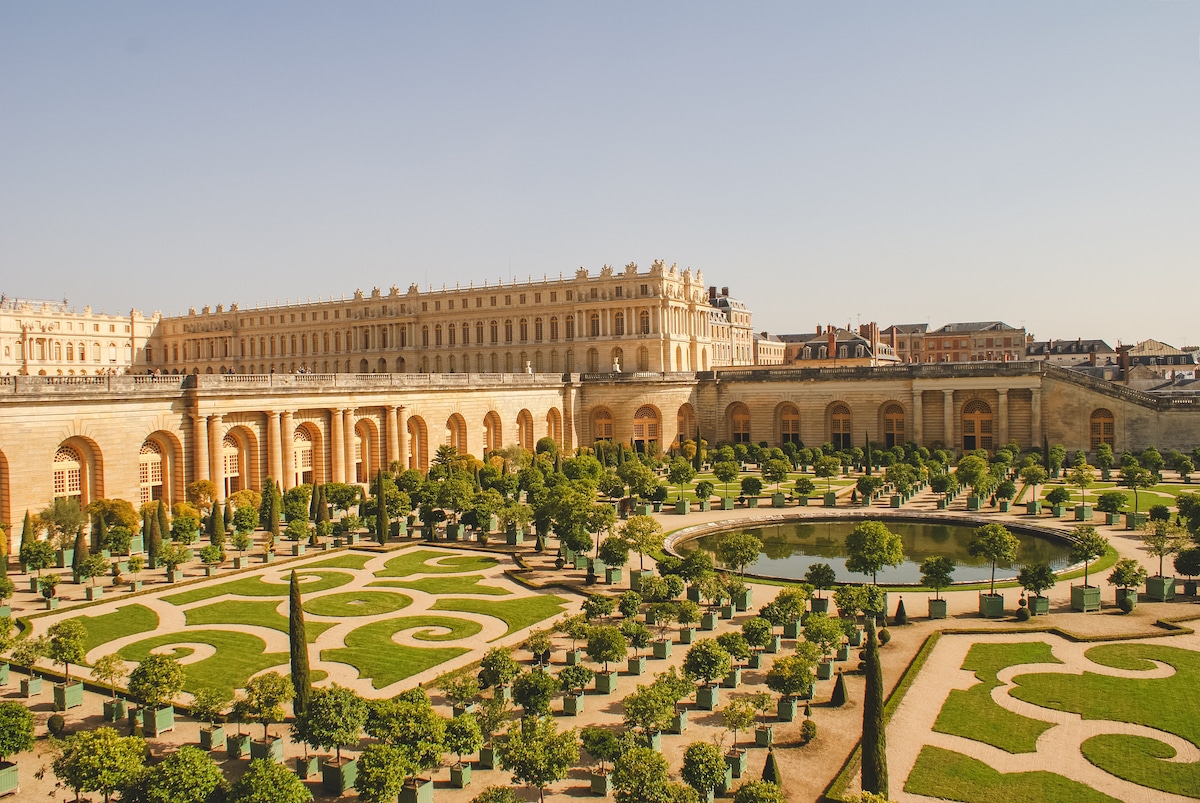 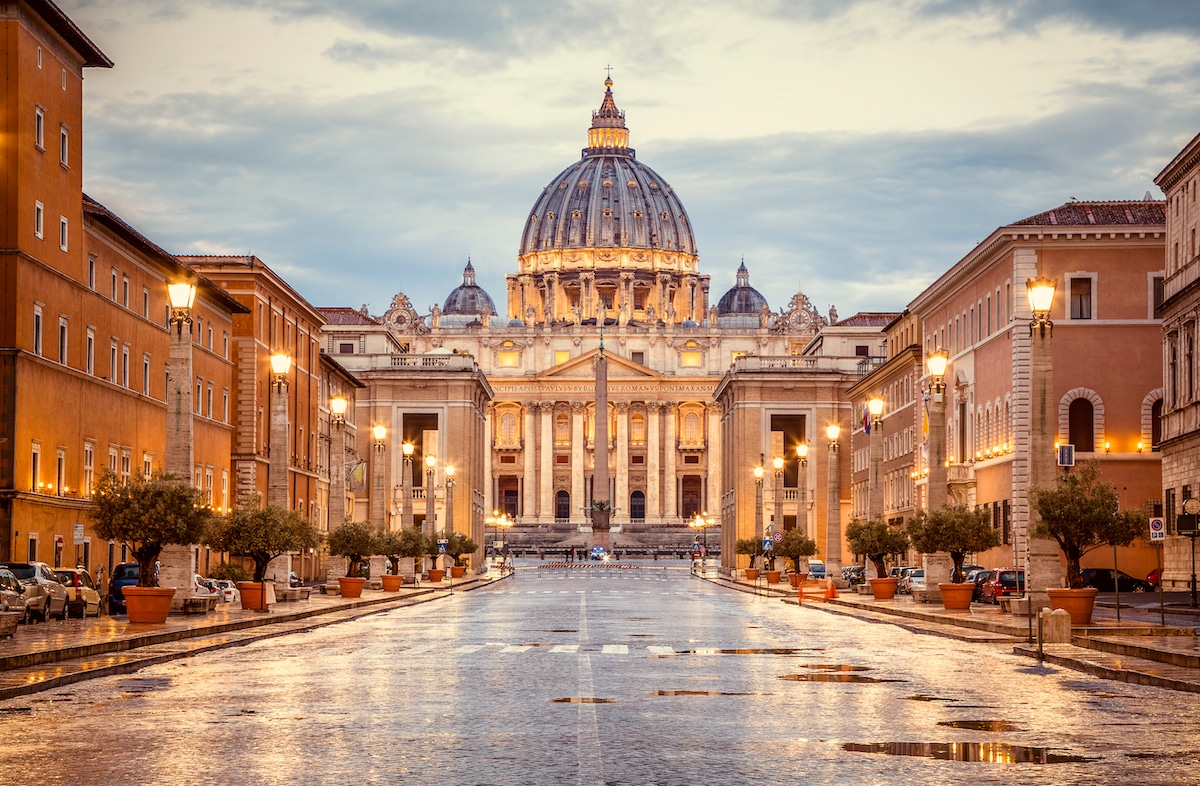 St. Peter’s Basilica is sometimes called the greatest of all Christian churches. Though it is often thought to be a completely Renaissance work, much of St. Peter’s can actually be considered Baroque.  Gian Lorenzo Bernini was considered the most influential architect and sculptor of Baroque design. His work on St. Peter’s Basilica, including the baldacchino and Piazza di San Pietro, make this work Baroque.

The baldacchino is a great example of an architectural element that would have been Renaissance if not for Bernini. This architect’s columns were bronze and decorated with leaves and bees. Curved sculptural pieces replaced more monumental Renaissance elements.

Aside from the architectural scale, Bernini took a Baroque approach to the redesign of the site as well. The piazza is designed as a piece of the city that should blend in to all of its surroundings—radically different from Bramante or Michaelangelo’s approach of creating a monumental standalone building. 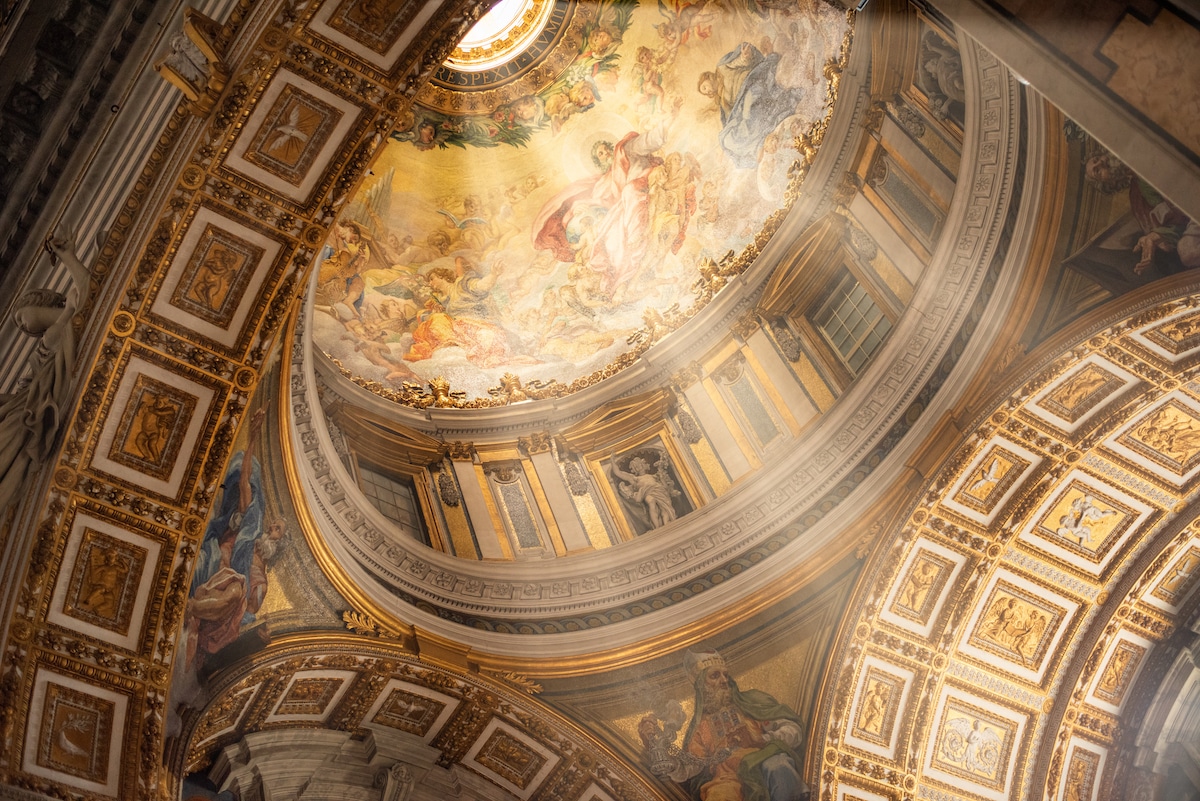 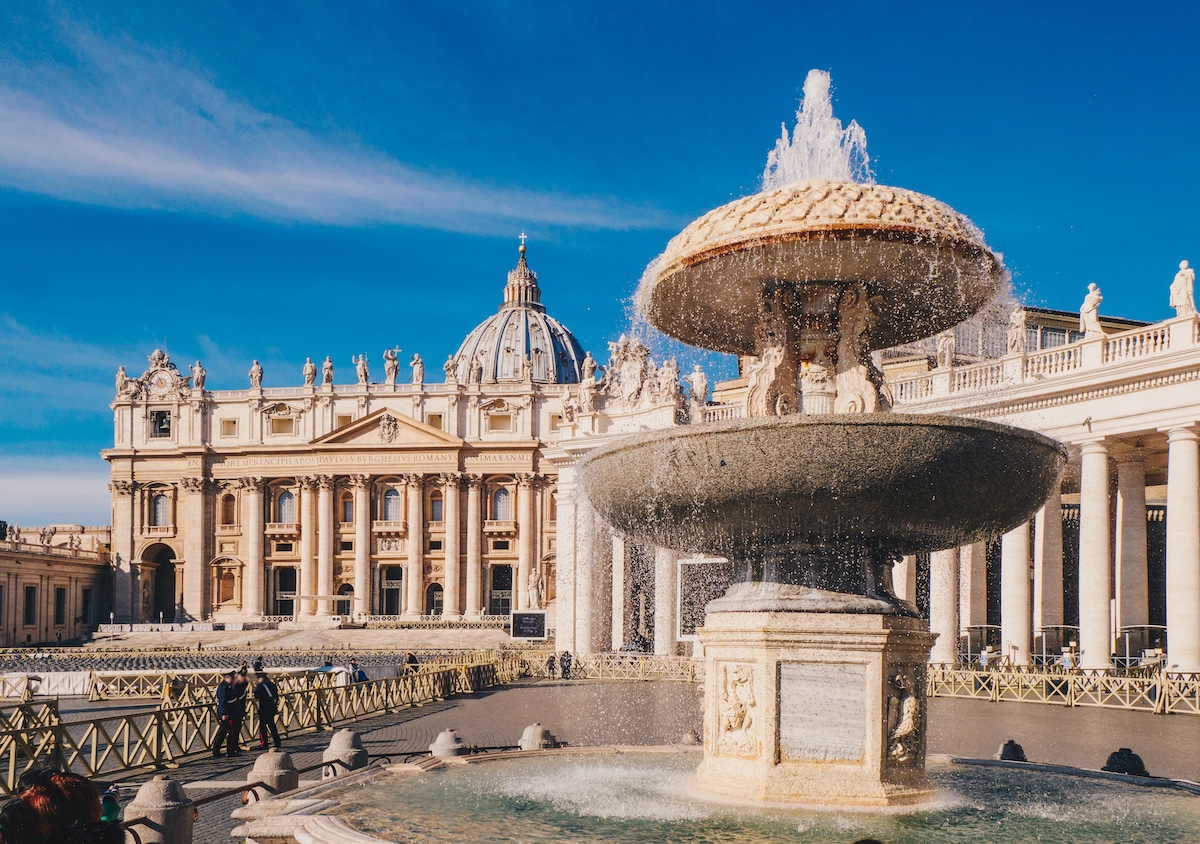 Chapel of the Holy Shroud 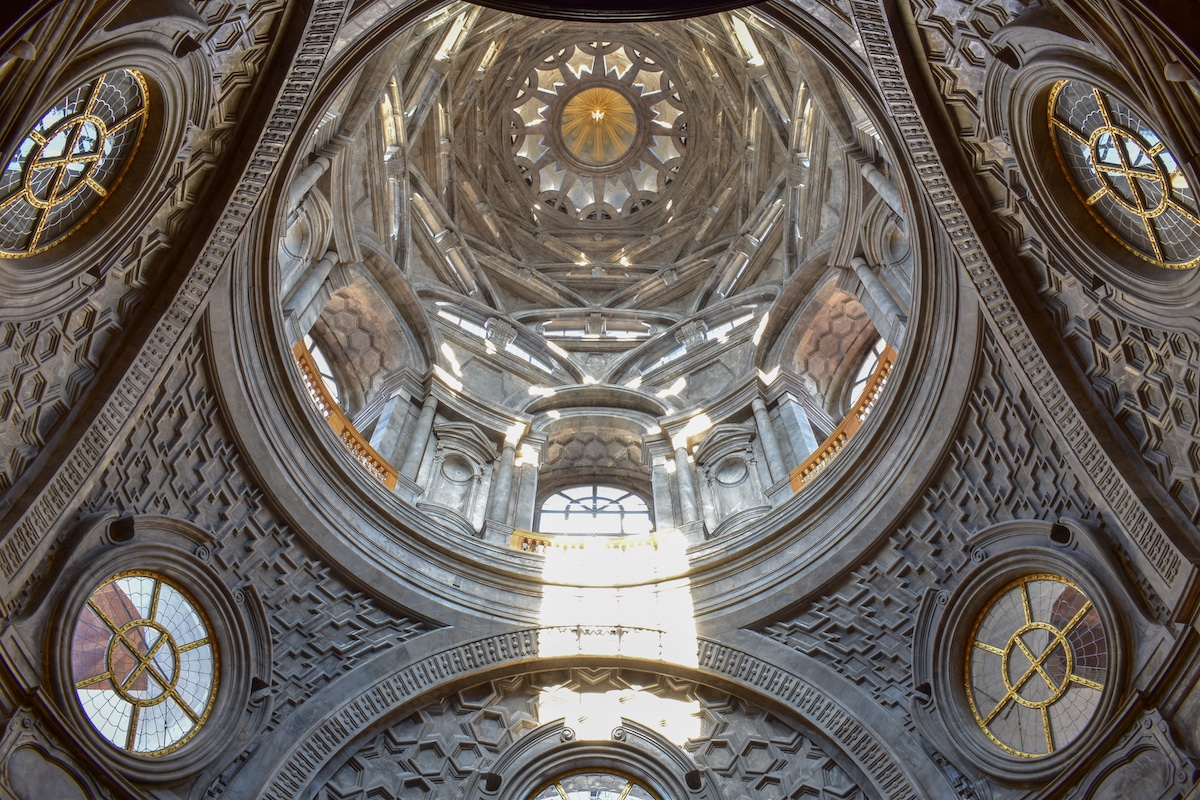 The Chapel of the Holy Shroud, or Cappella della Sacra Sindone, is a chapel dedicated to the Shroud of Turin. Some believe this cloth bears the image of Jesus of Nazareth and that it was the same shroud he was buried in. The building was designed by architect Guarino Guarini specifically to house this holy relic.

Like many Baroque works, the chapel features an impressive dome, in part made possible by Guarini’s training as a mathematician. However, this dome would cause structural problems later when a piece of marble fell, forcing the building to close. The chapel would face further bad luck when a fire in 1997 extensively damaged the building.

The Chapel of the Holy Shroud reopened to the public in September of 2018 and is now open for tourists to see the iconic Baroque interiors with contrasting materials and an incredible spiraling dome. 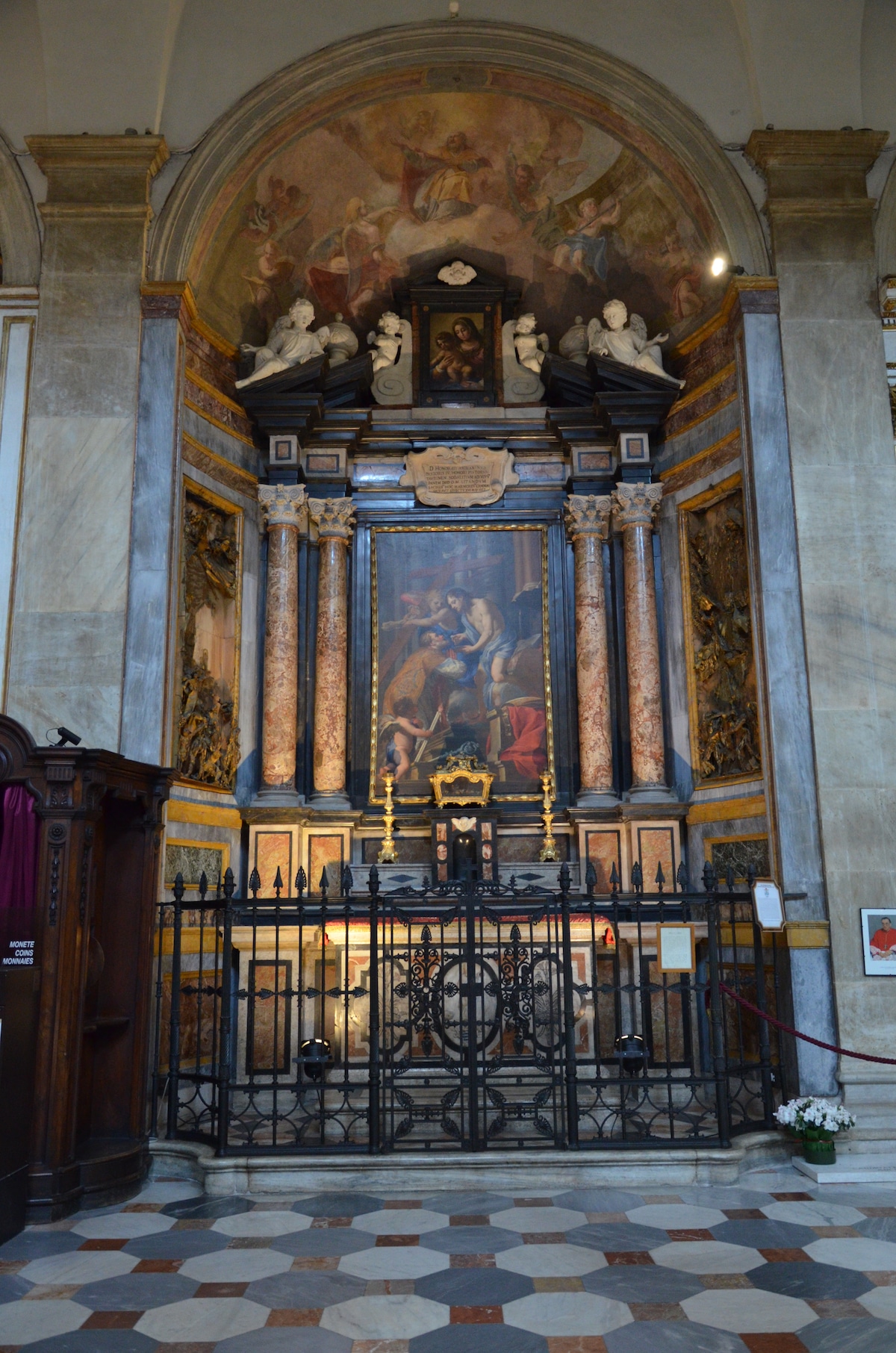 Chapel of the Holy Shroud in Turin, Italy (Photo: Stock Photos from D.serra1/Shutterstock) 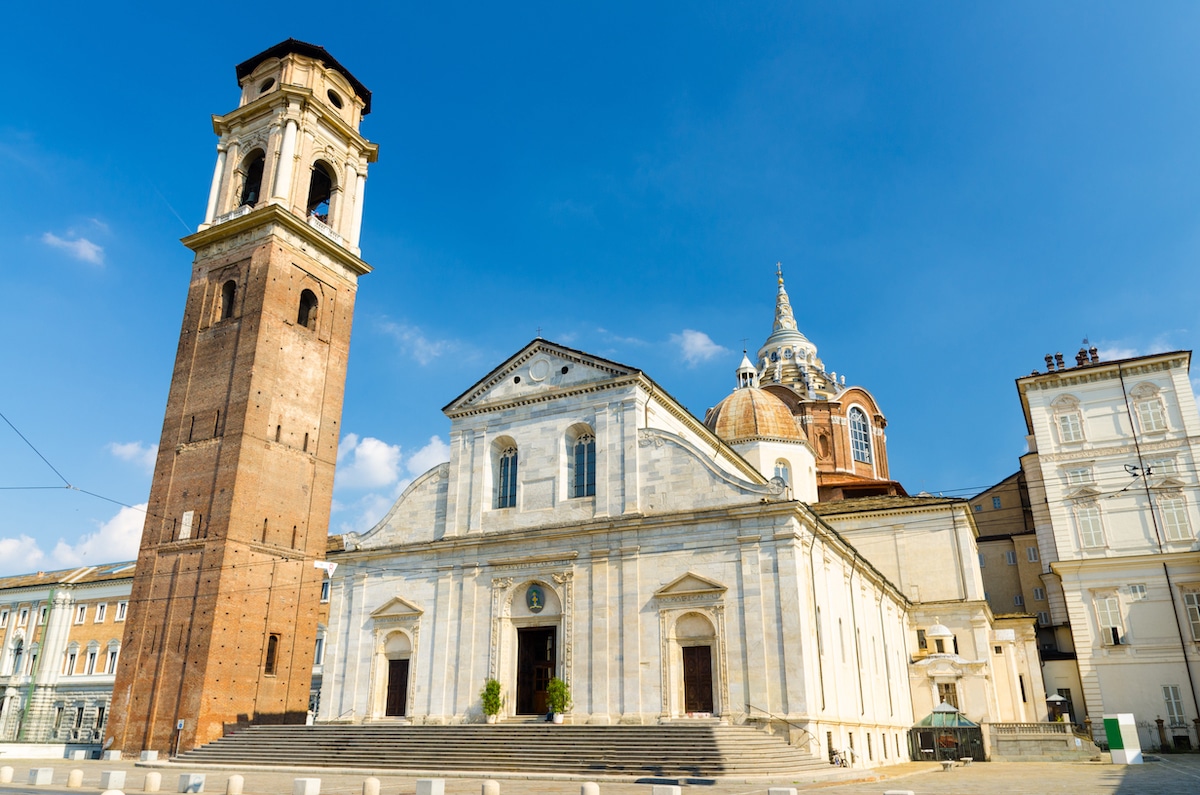 Hôtel national des Invalides, or The National Residence of the Invalids, is an impressive collection of buildings. It is famous for including Napolean’s tomb and for the long list of historical events that took place there. The name comes from its primary function: to create a hospital and retirement for war veterans.

The main architectural movement is called the Dome of Les Invalides which was inspired by the dome at St. Peter’s Basilica—perhaps the perfect example of Baroque domes. This project is also a great example of the French Baroque style also found in the Palace of Versailles. 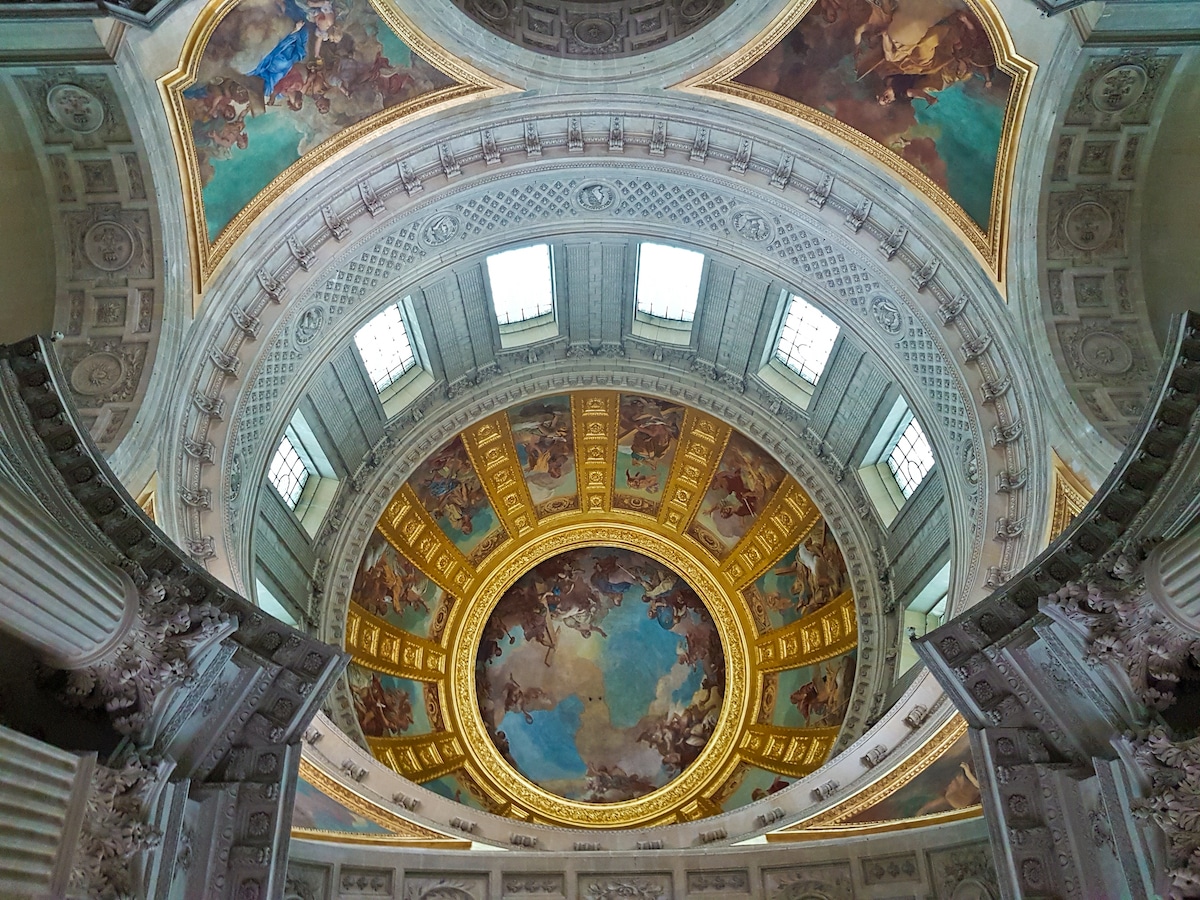 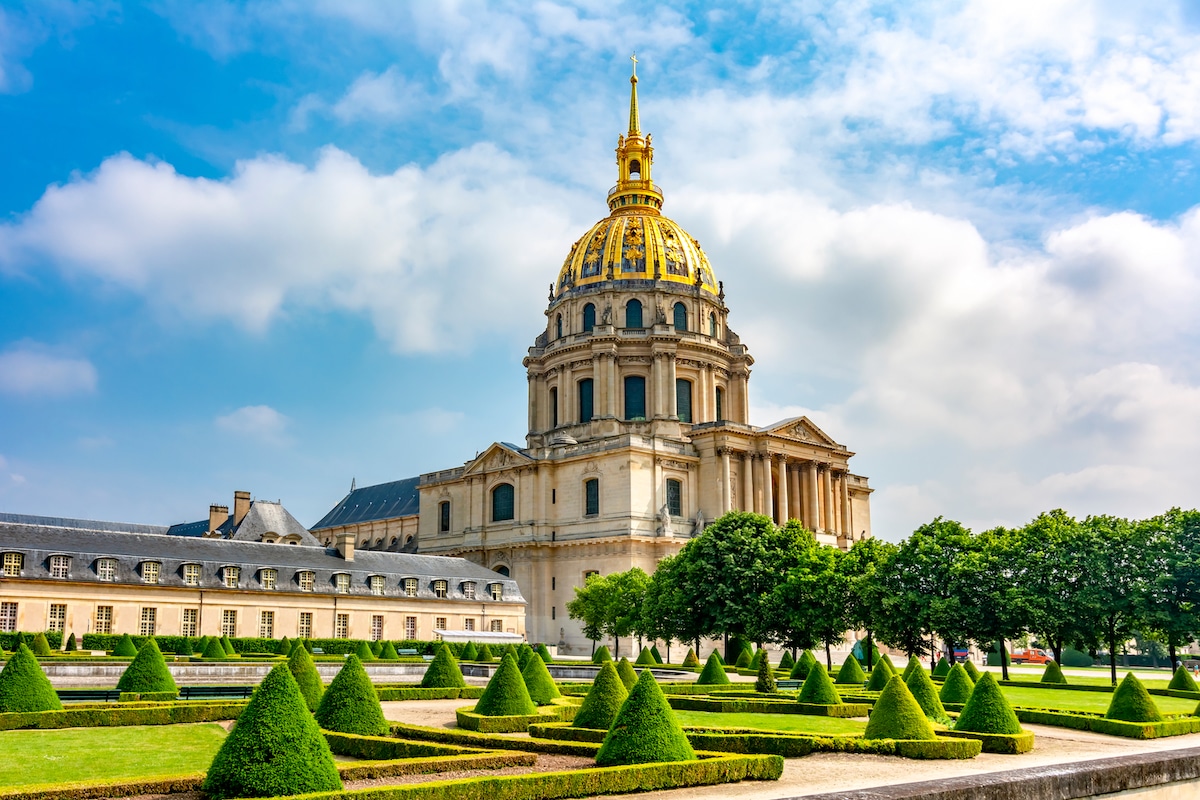 Why should you spend your cash in the stock market?

Mon Mar 29 , 2021
People practice to work description of a mechanism for making payment and possess it for eventual use. Conserving cash won’t be extremely useful and effective. To progress the increased value you would like to catch a post the money on the stock clearinghouse. The property market will enhance the quality […]