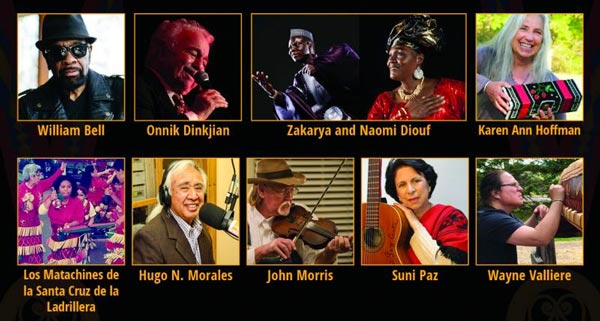 The National Endowment for the Arts, in partnership with the National Council for the Traditional Arts, will present “The Culture of America: A Cross-Country Visit with the National Endowment for the Arts National Heritage Fellows” on March 4, 2021 at 8:00pm.  Join storyteller Queen Nur as she hosts a virtual trip across the country, taking viewers into the homes and communities where the 2020 National Heritage Fellows live and create. The pre-recorded virtual presentation will be webcast free to the public at arts.gov. No RSVP needed.

As part of this one-hour presentation, viewers will:

* Hear the soul music of William Bell (Atlanta, Georgia)—one of the first artists to sign with Stax Records in the 1960s—and learn more about his efforts to mentor the next generation of songwriters and musicians.

* Meet Onnik Dinkjian (Fort Lee, New Jersey), a performer of traditional Armenian folk and liturgical songs, and one of the last remaining Armenians who speaks and understands the Armenian dialect from Dikranagerd.

* Connect with the vibrant music and dance of Zakarya and Naomi Diouf’s Oakland, California-based Diamano Coura West African Dance Company, which since 1975 has taught the traditions of the African diaspora through dance.

* Visit the Stevens Point, Wisconsin, home of Karen Ann Hoffman (Oneida Nation of Wisconsin), as she demonstrates distinctive Haudenosaunee Raised Beadwork, and learn about her efforts to use this tradition to respond to contemporary issues.

* Explore the tradition of Los Matachines de la Santa Cruz de la Ladrillera, traditional religious dancers from Laredo, Texas, who honor the Holy Cross on May 3rd and the Virgen de Guadalupe on December 12th in a ceremony that is well over a century old with its blend of Indigenous and European cultural expressions.

Morales is the 2020 recipient of the Bess Lomax Hawes National Heritage Fellowship, presented in recognition of an individual who has made a significant contribution to the preservation and awareness of cultural heritage.

* Meet John Morris, a living carrier of the old-time fiddle and banjo music of Clay County, West Virginia, whose family launched old-time music festivals across the state and region in the late ’60s and early ’70s, and who continues to mentor musicians in this tradition.

* Listen to the music of Suni Paz (Henderson, Nevada), a songwriter and performer of Latin American folk music who has engaged people of all backgrounds and ages in her efforts to express life’s message through song.

* Watch as Wayne Valliere (Lac du Flambeau Ojibwe) (Lac du Flambeau, Wisconsin)—one of only a handful of Native birchbark canoe builders today in the United States—shares his craft, highlighting its significance in the Anishinaabe culture.

The National Heritage Fellowships are the nation’s highest honor in the Folk & Traditional Arts. Since 1982, the National Endowment for the Arts has awarded 449 fellowships throughout each state and territory of the nation, recognizing artists working in more than 200 distinct art forms. Fellows are nominated by the public, and it is the great privilege of the Folk & Traditional Arts staff to manage the nomination and recognition of the National Heritage Fellows. Each fellowship includes an award of $25,000.

Thu Feb 4 , 2021
The experience of entering Jackson Fine Art on Buckhead’s sleepy East Shadownlawn Avenue is for that reason, an utterly novel one. The manicured landscaping and vintage house, with its white-painted brick, twin peaked rooflines and Tudor-style black trim, is fairy tale charming. One of the country’s premiere photography galleries, Jackson […]

7 Places in Your Home to Display a Buddha Statue