In the beginning, the weathervanes pointed the way. While scouring antique shops in the 1970s, Margaret Z. Robson purchased rustic, handmade barn toppers along with other handmade bits of Americana.

Robson was “very attached to the American democratic experiment, so [she] bought weathervanes, and duck decoys and quilts,” says her son Doug Robson, who inherited his mother’s interests. “The collecting morphed into something more interesting and radical as time went on.”

His mother was drawn to the people behind the art, known and unknown, and through collecting,  helped others become more aware of the leading lights in what was once called folk art, then outsider art and now categorized as self-taught.

In just a few decades, Margaret Z. Robson had amassed one of the most significant collections of such art in the country, dating back to the early 20th century. After her death, 93 works were donated in 2016 to the Smithsonian American Art Museum (SAAM) in Washington, D.C., which had already established itself as a leading center for this unique and arresting branch of American art. 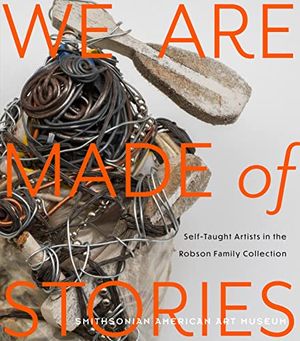 Just opened this month, “We Are Made of Stories: Self-Taught Artists in the Robson Family Collection” includes highlights from that gift, along with 32 promised works from Doug Robson’s collection and a major work he donated to the museum this year.

Altogether, “it’s one of the most significant gifts in the area to the self-taught program at SAAM in the museum’s history,” says Leslie Umberger, curator of folk and self-taught art at the museum who organized the exhibition.

Forty-three artists are surveyed in the show, including some of the most well-known names in the field, from Howard Finster, whose distinctive paintings festooned with declarations and sermons adorned album covers by R.E.M. and Talking Heads in the 1980s, to Henry Darger, whose large tracts of children at war found just prior to his 1973 death in Chicago caused a sensation.

The show’s oldest artists include Bill Traylor, born into slavery around 1853 who began making art at age 86 and was the subject of a major exhibition at SAAM in 2018 and William Edmondson, who carved cut stone, and became the first African American and first self-taught artist to have a solo show at New York’s Museum of Modern Art in 1937.

Many more lesser-known names receive attention and new consideration. “Eleven of them, we don’t actually know their identities,” Umberger says. The most enigmatic of them has been given the name Philadelphia Wireman, after his work—about a thousand small assemblages of wire and tape and reflectors and other scrap materials—were found in a pile in an alley. “Trash treasures from the streets of Philadelphia,” Umberger calls them.

And yet there is something compelling about their tightly wound forms. “Most of them are about the size of the hand, and they’re very talismanic,” she says. “They seem to have a connection with African spirit bundles—protective amulets made from materials or objects that held some significance or meaning for their maker.”

They’re ascribed to an African-American man, in part from the neighborhood from which they are found. And Black art is significant part of the collection, since by definition it was self-taught and comes out of a drive for self-expression from those excluded from the academies.

Born in Minnesota, Margaret Zuehlke was a successful businesswoman on her own in Chicago before she got involved in politics during John F. Kennedy’s presidential run, then married lawyer John Edwin Robson, who worked in different Washington administrations over the years.

The couple picked up antiques here and there, but didn’t begin to get into the art and the unsung artists behind the works until the late 80s while living in Atlanta. Their first piece was a drawing by Traylor, followed by the carvings of Ulysses S. Davis. His carvings were rooted both in American figures like George Washington and Uncle Sam and African elements, says Doug Robson. “That felt like an important bridge in the collecting.”

Self-expression outside the mainstream

It was at a time when self-taught art was gaining attention in the art world. In 1970, the Smithsonian American Art Museum had acquired James Hampton’s elaborate Throne of the Third Heaven of the Nations’ Millennium General Assembly, which the artist made from aluminum foil in a D.C. carriage house, opening the door to further self-taught works of wonder at the museum. A mile away, the Corcoran Gallery of Art staged its groundbreaking “Black Folk Art in America, 1930-80” in 1982, a show that was a likely influence on Robson’s collecting.

Working with curators, gallerists, antique shop owners and “pickers,” the couple’s collections grew over the years, but especially after Margaret Robson became a widow in 2002.

“In the last couple decades of my mother’s life, art became her raison d’être. It’s what energized her and where she focused her energies,” Robson says.

Stories behind the artists

Robson may have helped to widen the perimeters of the genre, too, through her support of the Creative Growth Art Center in Oakland, California, that encourages work from the developmentally disabled. Margaret Robson was one of the first to buy the heavily wrapped fabric sculptures by Judith Scott, who was born deaf and had Down syndrome. Recognition grew for Scott’s work such that, after her death in 2005, it was featured in a 2014 exhibition at the Brooklyn Museum and included in the Venice Biennale in 2017. Margaret Robson “was very involved in a variety of ways that a lot of collectors are not,” says Robson. “Her work in advocacy helped bring this art more to the forefront of visibility in this country.”

Robson, too, was taken by the neurodivergent art from the Creative Growth Art Center. “Dan Miller was the first thing I ever bought from them in the 90s,” he says. “Two little pencil drawings that were so forcefully rendered they looked like wire.”

It is a striking, nearly 12-foot long, untitled 2016 abstract from Miller that is Robson’s recent gift to SAAM. Such work, he says, “shows you that that kind of creativity can come from places we don’t even consider.”

For both generations of Robsons the art was something they surrounded themselves with at home. Robson recalls his mother’s Chicago apartment late in her life, with “a Judith Scott sculpture hanging in her bedroom—she woke up to that every morning. The beautiful William Edmundson birdbath was right in the middle of her apartment. She used it as a gentle staging ground for her mail.”

Mertz, a retired die cutter in Michigan, took to painting hundreds of old railroad spikes in bright hues, polka dots and faces. In the exhibition, the untitled 1980 work sits piled in a corner. “It always got a reaction out of people, because they’re so fun and whimsical,” Robson says. “Children loved them, they always wanted to go up and play with them.”

Robson says when his mother died in 2014 at 82, it was a bit sudden. “She hadn’t really really formulated a plan about what to do with the collection, but she would say to me, in only the way my mother could, ‘You’re going to have to deal with this someday,’ which was somewhere between a gift and a threat I suppose.”

A sportswriter covering tennis for publications like USA Today, Robson says he wasn’t fully prepared for the challenge, “but when I did, I was also very inspired by what my mother left behind, which sort of catalyzed my own collecting journey.”

Donating to the Smithsonian seemed a natural, he says, “some of my childhood had been spent here. It’s one of the major art institutions that early on gave this kind of art a certain prominence and made it part of the American story, And I love that it’s for free.”

He’ll also endowed the Margaret Z. Robson Symposium Series, taking place this year October 7 with “We Are Made of Stories: Selfhood and Experience in Art.”

Ep 116 Taking Action with your Art

Wed Aug 3 , 2022
Nowadays, we’re chatting about getting motion with your art…And what we mean by that, is when you discover yourself a little bit stuck someplace, then how to do one thing about it. https://mcdn.podbean.com/mf/world-wide-web/tpm726/Ep_116_Using_Action_with_your_Artbkcnx.mp3 Subscribe: iTunes | Stitcher | Spotify | Amazon Songs | RSS SANDRA The concept for this episode […]